There is much wisdom in saying that we Have a Mental Illness when we speak of our Bipolar Disorder. People say it gives us more Control. But there’s one aspect that is often forgotten. This illness by it’s very nature is cyclical, and our minds don’t always stay where we put them.

What I mean is that it’s fine and dandy to say you Have a mental illness and you Control it when you’re stable and doing OK and you can actually mean it. But when you go either too high or too low then you are Not in Control of your illness, By Definition!, and it’s silly to pretend you are, just because you use certain words to describe it.

I feel too much cognitive dissonance to think that I simply have an illness in the bad times. I’m Bipolar personified then. My emotions change and take me over and all I can see is where I’m at at the time. I can’t see out of my dilemma, even tho I Know differently.

It’s important to acknowledge where you’re at in life. If you’re in the pit or flying too high then you are Not in control of your illness. Why else take all those pills and go to therapy and do all the mind tricks we do to take care of  ourselves to be OK? If we weren’t messed up by the illness we wouldn’t need to do all that would we?  Of course not. We’d be fine like the rest of humanity… (some sarcasm here…)

Personally I use the terms interchangeably. I find them both empowering. I found it empowering the first time I was diagnosed 18 years ago at age 45 and I have ever since. I’ve had Bipolar my whole life and I’m considered a model of recovery by my Psychiatrist and counselor both. I do well mostly, and have a lot of insight into my illness. But I still lack that control much of the time.

Now and then I have some control, but I am Not in Control when push comes to shove. Then the bipolar takes over and I’m lost. That’s when I feel like I Am bipolar, deep in my bones. And you know what? I don’t mind calling myself Bipolar when I feel like that. It seems to fit me better than just saying I Have it. It’s more visceral.

I don’t mean this to be a downer for anyone. In fact I mean it to be empowering. I believe that You control your life in the long run. But being in control of your own life means accepting all the parts of it, even the Bipolar disorder that takes away that control.

In the end what matters most is how you relate to your illness and your strength to endure it. And I do mean endure because it’s hard as hell. Making peace with all parts of ourselves is crucial to this struggle. Accepting the dark parts of ourselves is a part of the Dance of Life, especially for those of us with Bipolar, and it’ll always be this way.

So think whatever you want. Call it by any name you choose. Relate to it however it gets you thru the night. It’s all good, but don’t think you have it under Control. Don’t make that mistake when you say you “just Have” this illness. It’s all too easy to think you have it all under control if you say you just have it. Be careful not to let it mean more than it can.

Words have power and the words you use will define things for you it’s true. But saying you Are Bipolar doesn’t hurt you. It means you know yourself. You know who you are in your worst moods. You know yourself deeply and fully and you accept responsibility for that knowing by claiming your identity. It’s OK to do this. It’s even wise I think.

And it’s also fine to think that you Have this illness. I don’t mean to imply differently. But I’ve written all of this just to point out that it’s not any one way all the time. It Changes! It’s cyclical and when it changes and you lose control, you have to accept where you’re at with whatever grace you can.

If that means saying you Have bipolar that’s cool. If it means you say you Are bipolar that’s cool too. Yes words have power, but only the power we give to them. We don’t have to lose what power we do have by always being “psychiatrically correct” in the words we use to describe our illness. We have free will in the definitions we use to talk about our lives, even if not completely in what our lives may have become.

Wishing you stability in the coming year, 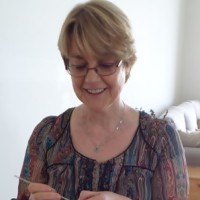 Magick and occultism for the modern magus

MY MASK HELPS YOU - - YOUR MASK HELPS ME! Will you please wear your mask to help save my heart?

A Stairway To Fashion

imagination is the key